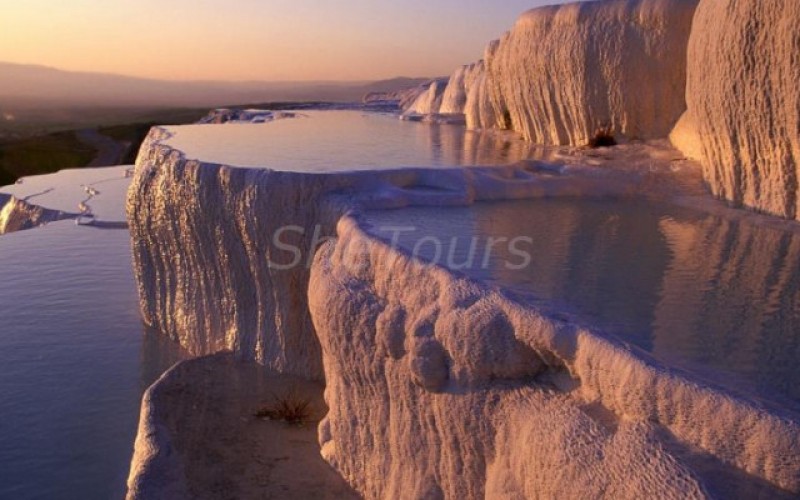 Early morning flight from Istanbul to Denizli. After arrival to Denizli airport you will be transferred to Pamukkale. On the way to Pamukkale, we will have a lunch in a local restaurant. After lunch we will visit: Necropolis, Roman Baths, Dominian Gate, Apollo Temple, Theater, Antique Pool (Cleopatra's Pool).

Pick Up Location : From hotel

Necropolis-In Greek language means City of Dead, cemetery. Hierapolis cemetery is one of the widest cemeteries in Anatolia. There are 4 different types of graveshore and belong to the late Hellenistic, Roman and Eastern Roman periods.

Roman Baths-It was built in the 3rd century A.D.Roman time. When the effects of Christianity had increased and accepted by everyone in Hierapolis in the 4th century A.D., Roman baths were converted into a church.

Dominian Gate-Is on the north of Hierapolis and has two round towers. It is also known as Frontinus Gate because it was built by Julias Frontinus (84-86 A.D.) proconsual of Asia Minor. Then it was dedicated to the Emperor Domitian by Frontinus.

Apollon Temple-Apollo was the most important God for local people. A honorary temple was built in front of the theatre for him.

Theater-It is located in the middle of Hierapolis. It was built during the reign of Emperor Hadrian in 2nd century A.D. and had a capacity of 8 500-10 000 spectacors.

Antique Pool(Cleopatra’s Pool)-Modern spa complex with a thermal pool that is open to public. The pool is surrounded by lush greenery and in it are marble columns, capitals and plains that are believs to have fallen from the nearby Temple of Apollo during an earthquake making this a sacred pool. Cleopatra is said to have swum in an earlier version of pool here.